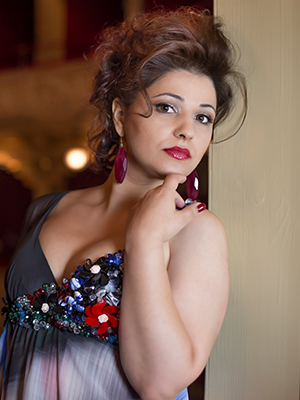 Stefanna Kybalova was born in Sofia, Bulgaria, and she began studying piano at the early age of three attending the music school Ljubomir Pipkov in Sofia. As infant prodigy, she won a scholarship from the State and she was given the possibility to study at the Conservatory of Prague and from 1990 at the Conservatory “G. Verdi” of Milan under the guidance of M° Mario Delli Ponti.   At the age of eleven, she was chosen by M° Bruno Casoni to be part of Teatro alla Scala’s children choir, this activity highlighted her talent, picking her out and giving the possibility to emerge as soloist. Soon she began studying opera singing at the Conservatory of Milan attending the class of Prof. Margaret Hayward and graduating with highest honours under the guidance of M° Vittorio Terranova. She continues perfecting her repertoire with the soprano Fiorella Pediconi.  Her career began when she won the As.Li.Co. Competition and after she had the opportunity to come out for the peculiarity of her voice and her elegant stage presence, debuting some of the the most significant roles of the repertoire such as Violetta in La traviata in Busseto, Liù in Turandot, Mimì in La bohème, Tosca. She won the first prize at Voci Verdiane Competition in Busseto for Violetta in La traviata.   In few years she performed I lombardi alla prima crociata (Giselda) in Piacenza and Theater Kiel, Donna Elvira in Don Giovanni and  Mimì in La bohème in Seoul, Tosca at Smetana Hall in Prague, Verdi’s Requiem, Norma and Madame Butterfly in Piacenza, Asti and Chiavari. Than she performed Mimì in La bohème at FNO in Helsinki conducted by M° Michael Güttler and directed by Katariina Lahti and in Imperia She debuted in  Macbeth (Lady Macbeth) at Teatro Comunale in Bologna conducted by D. Abbado and Odabella in Attila ain the same Theater conducted by M. Mariotti, than she sang also Tosca at Staatstheater in Mainz, Luisa Miller at Teatro Verdi in Trieste, Macbeth in Piacenza with Leo Nucci, Toscain Luglio Musicale Trapanese with Maestro James Meena.