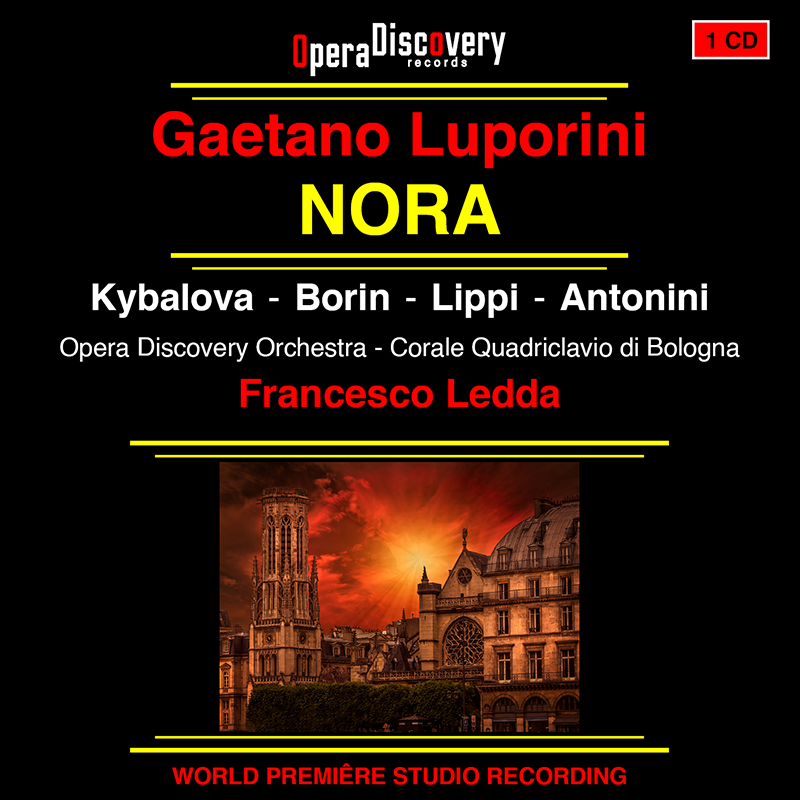 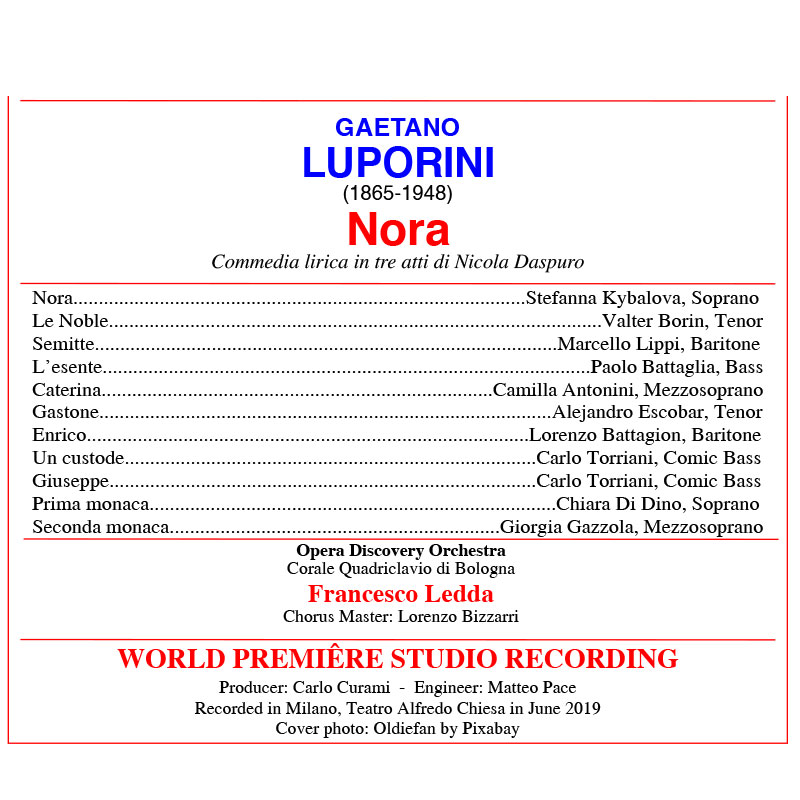 Nicola Daspuro was born in Lecce on January 19, 1853 and was an italian writer, journalist, and librettist. Several of his librettos were written under the pseudonym P. Suardon. He wrote the librettos for: L’amico Fritz by Pietro Mascagni, Mala vita and Il voto by Umberto Giordano, Renata by Oronzo Mario Scarano, Nora by Gaetano Luporini and Igor by Massimino Perilli. He wrote a biography of Enrico Caruso. Daspuro died in Napoli on December 13, 1941.

Returning to Lucca in 1902, after his long stay in Milan, Luporini accepted the job of director at the local Music School and organist at the municipal chapel. During this period he composed a Messa a 4 voci e grande orchestra, an Andante religioso and the Mottetto per la Santa Croce. However, he never gave up to composing operas. His last work, La collana di Pasqua, had been rejected by the publisher Ricordi, despite the success achieved at the Teatro Mercadante in Naples. Recommended by his friend and patron Giovanni Martinelli, Luporini purchased the libretto by Nicola Daspuro  of a work entitled Marie Lacroix  but subsequently renamed Nora.

Originally planned in four acts, Nora  was revised to three acts and was represented with success  at the Teatro del Giglio in Lucca on September 2, 1908. The cast included the renowned Piero Schiavazzi and Amelia Karola – a tested couple of the verismo repertoire. Despite its great success and some performances in Livorno and Naples, the work did not spread widely. We remember one last performance in 1937 in San Remo, then oblivion.

Paris, Bastille prison in the late 17th century.
Le Noble, who is serving a sentence for publicly insulting one of the king’s lovers, is in the company of Enrico and Gastone, two of his friends who have come to visit him. Upon the arrival of Nora, Semitte’s young wife, who was convicted of her husband’s treason, Le Noble is struck by her beauty. Left alone, they discover that they are in love and, with the keeper’s complicity, they manage to escape. A few months go by and Caterina complains about marrying old Giuseppe.

Upon the arrival of Le Noble, Nora, Gastone and Enrico a plan is drawn up to force her husband to forgive Nora and avoid her imprisonment, but Giuseppe hears everything and runs to warn Semitte. Left alone, Nora confesses all her fears, but is reassured by the words of Le Noble. Semitte, alone, meditates on revenge and manages to turn the trap against Nora who is dragged into a convent while Le Noble vows to save her. Years later, Caterina became the abbess of the convent where Nora was locked up. Upon the arrival of Le Noble and subsequently of Semitte it turns out that Nora is very ill. Semitte forgives the young woman who dies in the arms of her husband and sisters while a desperate Le Noble runs away.